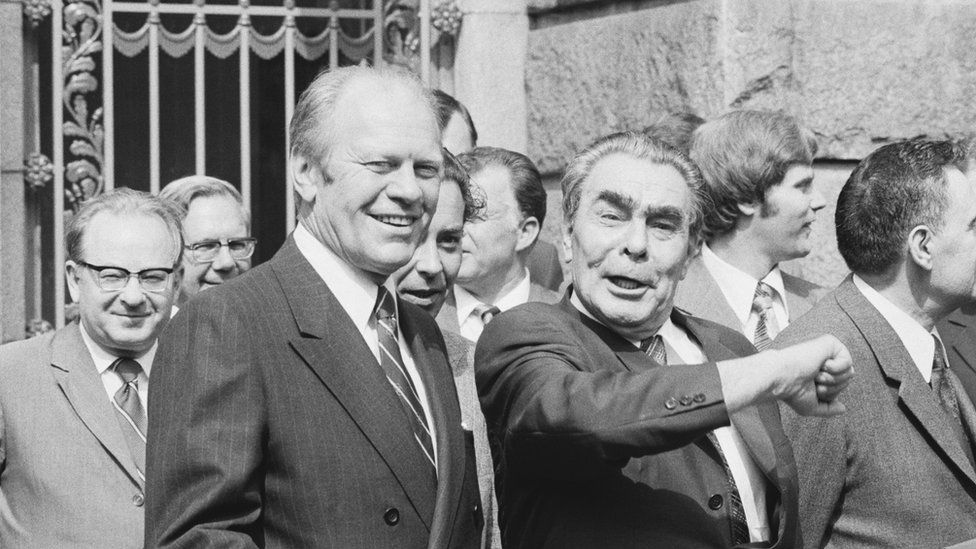 “When There Is Truth in a Gaffe.”

“There is no Soviet domination of Eastern Europe.” Gerald Ford said it loud and clear on national TV, and he could never live it down.

The occasion was a debate with Jimmy Carter. The contest took place in San Francisco’s Palace of Fine Arts on October 6, 1976, before a viewing audience of 63.9 million. The reaction against the incumbent President was immediate. From a geopolitical perspective, the comment was patently untrue. The nations of Eastern Europe were held captive by the Soviet Union and its Warsaw Pact.

Over the years, teachers have used Ford’s blunder as Exhibit “A” in how to blow a debate. Commentators have called it a “boneheaded moment,” a “fatal gaffe.” Carter pollster Pat Caddell, who was at the contest, blurted out, “Jesus, he’s lost his mind!” Even the sympathetic Ford Presidential Museum observes: “Carter is the clear winner after Ford makes a mistake….”

Decades later, David A. Graham, writing in The Atlantic, offered a more nuanced assessment: “the gaffe has endured as a symbol of Ford, a President whom history has recalled as well-meaning but clumsy both physically and verbally. But the idea that the remark was badly damaging to Ford is a pernicious misremembering, and the fact that careful outlets and writers are repeating it shows how deeply embedded the myth is.“

Moreover, Newton Minow, a former FCC chair who helped create the modern presidential debate, reported: “I talked to President Ford years later and was invited to talk at the Ford Library. We had lunch with President Ford and Mrs. Ford, and I said, ‘How do you feel now, looking back?’ He said, ‘The press thinks I lost the election because of the debates. As far as I’m concerned, the debates helped me. I started out 38 points behind. I ended up almost winning the election!’”

From the dog days of summer to Election Day 1976, Ford clawed his way back from a low of 29 percent support in mid-July to 45 percent support on the eve of the October 6 debate. Going into that second debate, Carter’s lead in the polls was statistically insignificant, 47 percent support compared to Ford’s 45 percent. Remarkably, when the last Gallup poll came out at the end of October, it showed a stunning upset in the making. Now Ford was leading Carter 47 to 46. Ford’s turnaround had the makings of the most spectacular comeback in presidential history. Alas, the clock ran out, and so did Ford’s luck, in the wee hours of November 3.

Historical context is always valuable. It reveals more than the first telling of the story. Not only was the sitting President relatively unharmed by what he said; not only did the polls show his growing strength as a candidate; but there is evidence that Ford was trying to make a much more significant statement than what was expressed. At least, the transcript of the evening suggests this possibility, as does a conversation I had with the former President in 2005.

In turns out there is a different way of interpreting Ford’s words when heard in context. Those of us who have spent a life reading in the humanities always jump back into texts and reread them for nuance, irony, unspoken assumptions, far-reaching implications, and unexplained meaning that might have been missed in our first encounter. Ford, it seems in retrospect, was talking about the spiritual strength of Eastern Europeans, something Soviet troops and weapons could never conquer. This prophetic interpretation is backed by Ford’s words and travels prior to the gaffe.

Fourteen months before that second debate, Ford had visited nations behind the Iron Curtain. Two months previous to that, he had met with Pope Paul VI. Those two European trips provide essential background for interpreting what Ford was apparently trying to say in the October 6 debate. Moments prior to the gaffe, Ford referred to his visit with the Pope at the Vatican. You wouldn’t know it from the YouTube clips, though. Immediately before the gaffe, Ford said, “I can’t under any circumstances believe that His Holiness the Pope would agree, by signing [the Helsinki] agreement, that the 35 nations have turned over to the Warsaw Pact nations the domination of Eastern Europe. It just isn’t true.”

As Ford told me in our 2005 conversation that addressed the subject, the Helsinki Accords gave courage to Eastern Europeans by recognizing their human rights in general and their religious rights in particular. Their insistence on exercising these rights would make it possible for the people of Poland and other Eastern Europeans to assert their moral and spiritual muscle in the face of the Soviet juggernaut. For proof, see Barbara Von Der Heydt’s illuminating book, Candles Behind the Wall: Heroes of the Peaceful Revolution that Shattered Communism. The commitment to religious liberty and other human rights would help the West prevail over the Soviet Union between 1989 and 1991, when the nations of Eastern Europe broke away, one after the other, from a brutal communist regime. And does not history rhyme? Think of the spiritual strength that Eastern Europeans are once again showing, in March 2022, in the face of Putin’s barbaric invasion of Ukraine.

Thus, in the October 6 debate, Ford seemed to want to make not just a geopolitical point, but a prophetic pronouncement: the Polish people and other Eastern Europeans possessed a spiritual strength that no tanks or rockets could crush. It was a matter he and Pope Pius VI had discussed during Ford’s visit to the Vatican. Thus, there was a significant truth behind Ford’s gaffe. He just did not articulate it well, as he readily conceded in his memoirs.

But: “What is truth?” So asked the villain of a story long ago and far away. Sometimes the truth is obvious and profound and in need of amplification. But then our human imperfections get in the way of finding the right order of thoughts and best words to say it.

Was Gerald Ford more prophetic than we knew? When I put that question to the former President in 2005, he dismissed anything so self-aggrandizing. But he had a very good comeback. In the wake of Richard Nixon, Ford believed it was his duty more than ever to assert the truth. The American people had the right to know the truth. A nation could only thrive in the light of the truth. All this explains why Ford insisted in that second debate, “It just isn’t true.” It was not true that the Soviet Union dominated Eastern Europeans. Ford had confidence that their spiritual resilience, in the end, would prove to be a rebuke to decades of Soviet oppression and lies.

In its death agony in 1991, the Soviet Union learned the hard way the truth that Gerald Ford proclaimed in 1974, upon being sworn in as President: “Truth is the glue that holds government together, not only our Government but civilization itself.” In America, we would do well to ponder that thought, too.

PrevPreviousThe Good Life: Aligning with the Things That Are Timeless
NextEpisode 8: “Those Darn American Founders: How Virtuous Were They?” with Lindsay ChervinskyNext
%d bloggers like this: