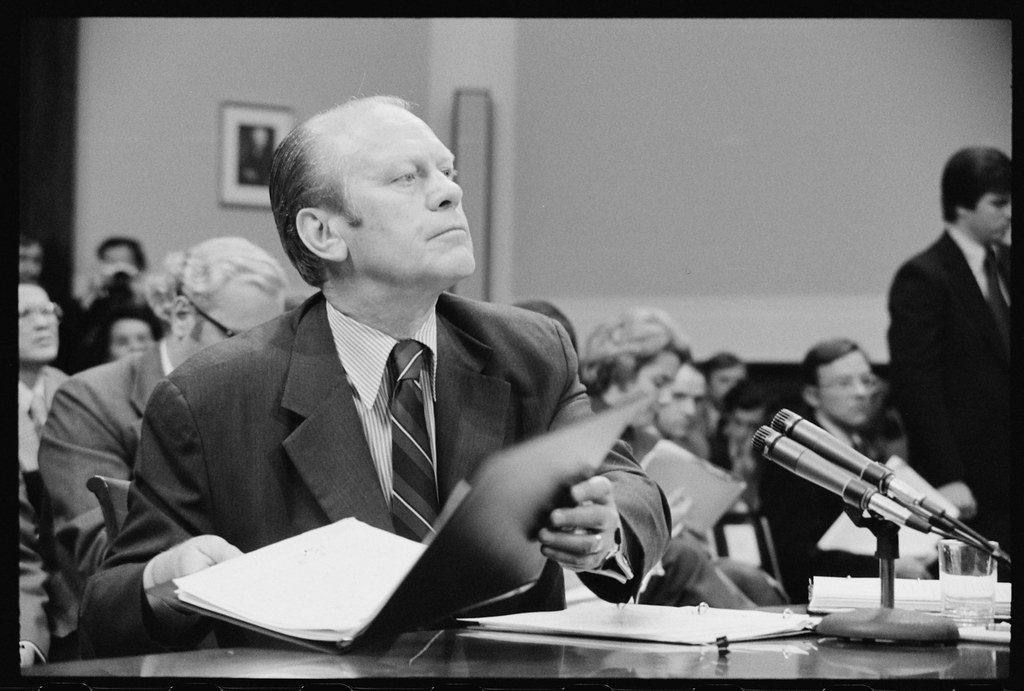 “Is Congress a Joke?”

Mark Twain served up joke after joke when it came to one class of Americans in particular. See if you can figure it out.

“It can probably be shown by facts and figures that there is no distinctly native American criminal class except Congress.” ~Pudd’nhead Wilson’s New Calendar

“Fleas can be taught nearly anything that a Congressman can.” ~What Is Man?

“In the first place, God made idiots. That was for practice. Then He made congressional committees.” ~adapted from Following the Equator: A Journey Around the World

Given how much Capitol Hill has been the perennial butt of jokes, it’s a wonder that a Boy Scout like Gerald Ford ever ran for Congress. On second thought, maybe it’s not.

Ford’s family, coaches, and midwestern upbringing taught him that service was not an abstract noun but an action verb. Service in the Boy Scouts and Eagle Scouts during the Depression gave young Jerry the opportunity to develop socially valuable skills and virtues. High school and college sports taught him to excel as a team player. Military service in World War II imparted the lesson that freedom isn’t free, that sacrifice is required to preserve the American experiment in self-government. All of Ford’s engendering experiences translated into concrete actions for the greater good.

After the war, Ford decided to run for Congress because that’s where he felt he could do the most to serve the greater good. Ever the competitor, he entered his first race for Michigan’s Fifth Congressional District because it had become putty in the hands of a corrupt political boss, the incumbent was an isolationist, and postwar America needed smart, energetic leadership in a world threatened by nuclear annihilation. Ford won that first race and never looked back. He was re-elected to Congress 12 times, winning each contest with more than 60 percent of the vote.

On Capitol Hill and back in his district, Ford defined himself as “a moderate in domestic affairs, a conservative in fiscal affairs, and an internationalist in foreign affairs.” In 1976, he ran for President on five organizing principles that grew out of his 25 years in Congress: (1) increased freedom for all American citizens from the encroachments of an ever-expanding federal government; (2) the preservation of America’s free enterprise system; (3) fiscal responsibility that restrained Congress; (4) a strong national defense; and (5) affirmation of the rights and responsibilities of state and local governments.

Despite his strong adherence to limited government, free-markets, and ordered liberty, Ford learned to work with a variety of people with whom he disagreed, always trying to see the issues from their viewpoint and learn what they might teach him. Both sides of the aisle, after all, were patriotic, and both were trying to do their best for the nation. A 2006 editorial in The New York Times noted that Ford “saw himself as a negotiator and a reconciler….”

In all the years he served in Congress, Ford steadily mastered virtues and skills that the greatest legislators have always possessed. Consider some of the dynamic polarities that he had to learn to balance:

Gerald Ford was never one to take himself too seriously. He could laugh at Congress’s expense as easily as the next guy. But, joking aside, he went to Capitol Hill with high purpose. Congress was the institution where an earnest Boy Scout from Grand Rapids, Michigan, could realize his potential to serve the American people for the greater good.