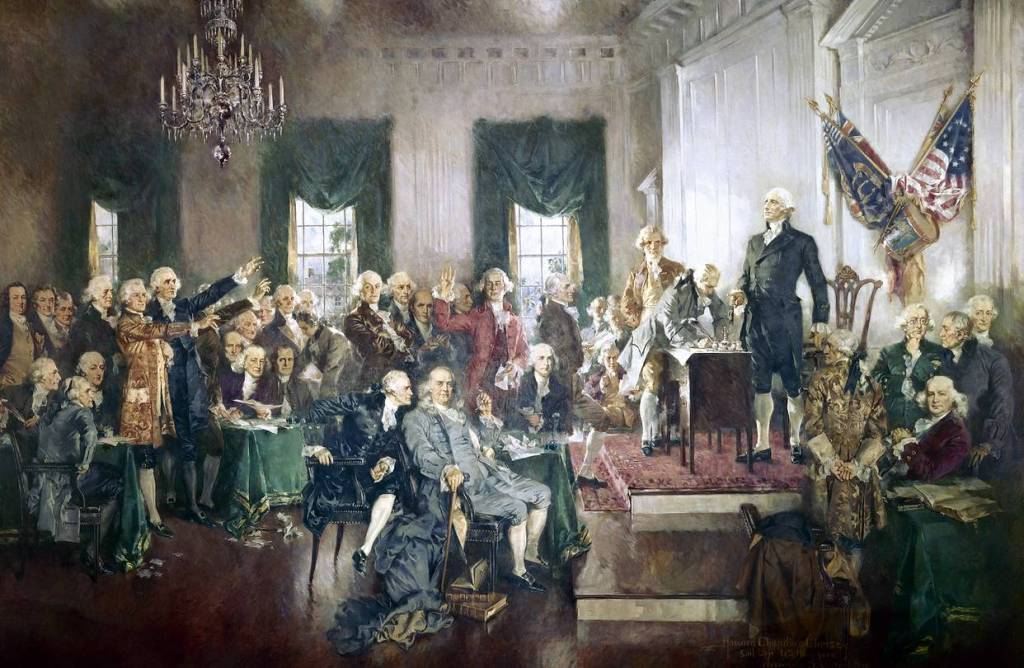 James Wilson was one of six men to sign both the Declaration of Independence and the Constitution of the United States. He played a critical role in framing the latter, and his early defense of the proposed constitution did much to secure its ratification. Wilson served as one of the new nation’s first Supreme Court Justices, and his Lectures on Law contain some of the period’s most profound commentary on the Constitution and American law.

In his law lectures, which were given at the College of Philadelphia, now the University of Pennsylvania, in 1790-1792, he observed that;

“There is not in the whole science of politicks a more solid or a more important maxim than this–that of all governments, those are the best, which, by the natural effect of their constitutions, are frequently renewed or drawn back to their first principles.”

This does not mean that contemporary policy problems can be solved simply by asking “what would the founders do?” But it does suggest that we do well to reflect on the principles that animated the men and women who helped win American independence and create our constitutional republic.

Citizens of the Constitution

Careful study of the founding era state constitutions, the Constitutional Convention, the ratification debates, and the Constitution itself yields important insights about the significance of separation of powers, checks and balances, federalism, and other aspects of American constitutionalism. As vital as these are, the founders believed that something else was even more important. Without a virtuous citizenry, republican governments simply can’t work, no matter how brilliantly their institutions are designed.

Virtuous citizens engage in political debate with civility, treat their opponents with respect and dignity, tell the truth, and so on. Perhaps most important, morality is a source of internal control, restraining and disciplining each citizen and, thus, limiting the need of external control by civil government. A moral citizenry is necessary before civic leaders can even begin to think about constitutional designs.

Most founders agreed that only religion is capable of generating and maintaining morality. As James Hutson of the Library of Congress put it, the founders embraced a syllogism that goes something like this:

That syllogism is controversial enough; but it gets even more provocative. When America’s founders spoke about “religion,” virtually all of them—even those most influenced by the Enlightenment—meant Christianity. The great Chief Justice John Marshall, for example, wrote that in America “Christianity and religion are identified.  It would be strange, indeed, if with such a people, our institutions did not presuppose Christianity.”

Shortly before America declared independence, John Adams wrote that “Religion and morality alone . . . can establish the principles upon which freedom can securely stand.” He regularly reiterated this conviction, noting for instance in 1811 that “religion and virtue are the only Foundations, not only of republicanism and of all free government, but of social felicity under all governments and in all combinations of human society.” Referring specifically to the U.S. Constitution, he wrote in 1798 that “[o]ur constitution was made only for a moral and religious people.  It is wholly inadequate of any other.”

When George Washington left the presidency in 1796, he delivered what is commonly known as his “Farewell Address”; which has since come to be regarded as one of the most important speeches in American political history. In it, he addressed the importance of religion and morality for the nation, noting that:

Of all the dispositions and habits which lead to political prosperity, religion and morality are indisputable supports.  In vain would that man claim the tribute of patriotism, who should labor to subvert these great pillars of human happiness, these firmest props of the duty of men and citizens. . . . A volume could not trace all their connections with private and public felicity.  Let it simply be asked where is the security for property, for reputation, for life, if the sense of religious obligation desert the oaths, which are the instruments of investigation in courts of justice?  And let us with caution indulge the supposition, that morality can be maintained without religion.  Whatever may be conceded to the influence of refined education on minds of peculiar structure, reason and experience both forbid us to expect that national morality can prevail in exclusion of religious principle.

In addition to being necessary for personal and public happiness, Washington emphasized that religion and morality are essential for ensuring the sanctity of oaths. Like many founders, he thought that belief in God and an afterlife where one’s deeds would be punished or rewarded was necessary to ensure that people tell “the truth, the whole truth, and nothing but the truth, so help me God.” He acknowledged that a few individuals could be moral without being religious, but he clearly thought these were exceptions to the general rule. “National morality” requires religion, and Washington went so far as to question the patriotism of those who “labor to subvert these great pillars of human happiness.”

A partial exception that proves the rule that the founders equated religion and Christianity may be found in 1789 letter by Benjamin Rush. In it, he contended that the “only Foundation for a useful education in a republic is to be laid in religion. Without this there can be no virtue, and without virtue there can be no liberty, and liberty is the object and life of all republican governments.” With a liberality unusual in his generation, he continued:

“…such is my veneration for every religion that reveals the attributes of the Deity, or a future state of rewards and punishments, that I had rather see the opinions of Confucius or Mahomed inculcated upon our youth, than see them grow up wholly devoid of a system of religious principles. But the religion I mean to recommend in this place, is that of the New Testament.”

Rush ended where many founders began, with the default assumption that Christianity supported and promoted virtues that allows republican government to flourish. But his suggestion that other religions foster the moral commitments necessary for republicanism is intriguing, and it may be useful in helping us to think about how virtue may be generated and maintained in our own time.

What are we to make of the founders’ conviction today? In the founding era, 98% of Americans of European descent were Protestants, 2% were Roman Catholics, and there were about 2,000 Jewish citizens in a handful of cities. Today, although 63% of Americans identify themselves as Christians, 37% do not, and 29% claim to have no religion. And the rate at which Americans are abandoning Christianity, specifically, and religion, more generally, seems to be accelerating.  This decline in religiosity may help explain the rampant incivility that most observers agree characterizes much of American political discourse.

What can be done?  For religious citizens, one possibility is to pray for that their fellow citizens turn, or return, to God. This is, of course, their prerogative—and one protected by the First Amendment. But, needless to say, it is not the role of the government to encourage such movement.

Another possibility would be for schools, public and private alike, to think seriously about ways in which students may be taught about the virtues necessary for civic life. Florida and other states have made excellent progress in implementing robust civics education that include emphasizing the importance of civic virtue.

Certainly, individual voters should insist that candidates be virtuous women and men, regardless of their religious commitments, or lack thereof. If more political candidates treated their opponents with dignity and respect, that might encourage citizens to do the same.

Finally, we can take comfort in the fact that the founders were wrong in believing that only Christianity can generate the virtues necessary for republican forms of governments. Japan, South Korea, Israel, Taiwan, and other countries offer examples of countries with non-Christian majorities that have healthy, functioning democracies. Perhaps Rush was right; religions other than Christianity have the capacities to generate the virtues necessary for republican self-government.

Whatever we conclude about the connection religion and morality, the founders were almost certainly correct that republican self-government requires a virtuous citizenry. It behooves us all to consider how civic virtue may be fostered and maintained today. And, of course, we should all start by examining ourselves.

Mark David Hall, Professor of Politics at George Fox University, will spend 2022-2023 as a Visiting Fellow at Princeton University’s James Madison Program and a Visiting Scholar at the Mercatus Center.  He is the author of Did America Have a Christian Founding? and Proclaim Liberty Throughout All the Land: How Christianity has Advanced Freedom and Equality for all Citizens (forthcoming).