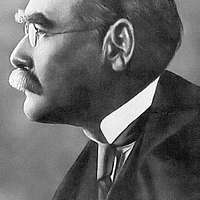 The Poem of a President

Editor’s Note: Ford, as a young boy, struggled with controlling his anger. The young Eisenhower had the same problem, and both their mothers took the unusual and interesting tack of having the lads memorize Rudyard Kipling’s poem “If—“. It is, as the author of this essay argues, a poem not much favored in our day, largely because of the reputation of its author. But the merits of the poem abide, and in any case serve as a reminder that a life of virtue demands a suppression of vice.

If Rudyard Kipling’s “If—” were not so popular with the hoi polloi, sophisticates would be denied an excuse popular among them to treat it with disdain.  If it had been written by anyone else—by someone whom it is less fashionable to dislike, for example—sophisticates would really be in trouble.  Think of William Ernest Henley’s “Invictus,” an inferior poem with which “If—” has often been compared.  Henley was not a colonialist like Kipling, who probably also ate with sinners, that unpardonable sin that a certain peaceable and wayfaring itinerant healer was accused of back in about A.D. 30.

Which is to say that Pharisees aren’t the only ones who grant themselves easy permission to ignore what they’re too lazy to consider with honesty and liberality.  Critics too have learned that subtle art.  But debunking, as C.S. Lewis noted, is easy, whereas criticism is difficult.  Why judge a poem’s case when you can dismiss it and hit the links?  What critic can fill the unforgiving moment with 60 seconds’ worth of dissenting opinion?   Kipling was guilty of all the right things.  (One critic says Kipling is an “icon of obnoxious wrongness” and “If—” a “classic of righteous certitude.”)  His poetry can’t possibly have any purchase on our attention.

But attribute “If—” to any person of approved disadvantage or grievance, and critics the world over will sing its praises.  They might even find a child to recite it on an occasion of national pomp and circumstance.

And this means that we must take it, like any other cultural artifact, on its formal, intellectual, and ethical merits.  It must stand or fall as an object either well or poorly made.

Its formal merits often go unnoticed by those who, averse to Kipling’s politics, say it has no formal merits at all—or, if it does, dismiss them as irrelevant.  The easiest way to do this is to declare that the question of form is elitist or outworn.  Even the matter of content is irrelevant if the source be objectionable.  If the demons shout, “What have we to do with thee, Jesus?” we may dismiss them without a moment’s thought.  So what if they can spot the godhead here in hiding and we can’t?  They are demons, not democrats.  Away with their insights.

But in fact the poem has several formal merits that demonstrate Kipling’s capacity for strict control, and its intellectual and ethical merits—or, rather, its vivid and rhetorically sophisticated description of the virtuous man—are rather more than its critics have managed to proffer by way of substitutes.  In passing let us instance their unimpeachable virtue of tolerance, which invariably ends up being its opposite.  Kipling’s Man is never so uncommitted as to punt on the matter of truth, “twisted by knaves to make a trap for fools” though it be.  He knows better.  And note Kipling’s phrase: “the truth you have spoken” is not “your truth.”  It is not the “my truth” nonsense  invented by a later and more idiotic age.

Now the poem certainly suffers from defects, the first of which is a bad title, and that is Kipling’s fault.  It also suffers from something that is not his fault: the promise of possessing the Earth, which to critics outraged by Kipling’s politics is intolerable: it rings only of that empire on which the sun never sets, even though that sort of possession is clearly not what Kipling means.

And it must be admitted that “If—” is not a great poem, though like most of Kipling’s verse it has technical merit: the alternating feminine and masculine rhymes make for a strict pattern of syllabic alternation: a line of 11 syllables followed by a line of 10 in a repeating pattern.  The poem resists hypnosis by varying end stops with enjambments, and the carefully balanced phrases serve a single periodic sentence sustained for four eight-line stanzas.  That is to say, Kipling has imposed both rules and limitations on himself; he is not playing tennis with the net down.  Not everyone can do this.

And we must also admit that there is a prosaic quality to the poem.  We certainly can hear the rhymes and the poem’s almost unbroken meter, but we rightly take its message—call it the making of a man—as if it were cast in prose or put in light blue script on a greeting card or inspirational poster.  It has the air of Quixote’s “Impossible Dream”—“to be willing to march into hell for a heavenly cause”—which, if nothing else, works well in musicals but maybe not so much in the Norton Anthology.  But it is worth recalling what T.S. Eliot in his essay on Kipling said: “people are exasperated by poetry which they do not understand, and contemptuous of poetry which they understand without effort.  “If—” elicits such a reaction because it works more by direction than by indirection.  Because of this and other reasons we are probably right to say that it is not high art; if Eliot’s distinction be allowed, it is verse rather than poetry.

But its message all the same—which, let us not forget, is addressed in informal language to a child—is a piece of high seriousness.  Readers tend to overlook the fact that the promise of possessing “the Earth and all that’s in it” comes at the end of what amounts to a series of worldly renunciations.  The speaker understands the weaknesses that his child-auditor is born into; he identifies those weaknesses by recommending their opposites: the courage to stand against popular opinion and the poise to abjure justifying himself against any wrongs he might suffer.  In the first instance the speaker understands (to use Chesterton’s apt image) that only a live fish can swim against the current, whereas a dead one can do aught but drift with it.  In the second instance he understands that self-justification tends to be petulant; it usually makes a mess of things.  Better to be silent.  Only the fool says all he knows.

What is more, the speaker advises his son to turn resolutely away from falsehood, to achieve the inner calm according to which he can treat both loss and gain—even in the ramped-up versions of “Triumph and Disaster”—indifferently.  The poem insists on treating as equals both the great and the lowly.  It recommends that we be willing to suffer all insults but commit none ourselves.  In fine, it recommends the suppression of the self for the sake of something like self-possession, which is clearly what Kipling means by “the Earth and everything that’s in it.”  The poem takes up an old paradox: to gain your life you must lose it.

Think of Cardinal Newman’s dignified description of the liberally educated man, the man who “is at home in any society” and who, like Kipling’s Man, “has common ground with every class.”

He knows when to speak and when to be silent; he is able to converse, he is able to listen: he can ask a question pertinently, and gain a lesson seasonably, when he has nothing to impart himself….  He has the repose of mind which lives in itself, while it lives in the world, and which has resources for its happiness at home when it cannot go abroad.  He has a gift which serves him in public, and supports him in retirement, without which good fortune is but vulgar, and with which failure and disappointment have a charm.

The end of Newman’s seventh discourse, like Kipling’s poem, also works by carefully balanced phrases, but lacking the features of verse—rhyme in particular but also metrical regularity—it has probably lived its whole life without ever having been committed to memory or recited at a single inauguration.  It has certainly never gained widespread favor with the great unwashed and thereby provided more chagrin for the sophisticates.  But is it for these reasons alone not the “trite” performance that “If—” is?  If so, then you may be assured that, as Eliot remarked of Kipling’s verse in general, “If—” has been dismissed “by reference to poetic criteria which do not apply.”

Over and against the noisy self-absorbed children in what the former poet laureate Robert Bly aptly called our “sibling society,” each burgeoning narcissist making demands on all the other little boys and girls in the Nanny State’s expanding Day Care, give me Kipling’s adult, who measures himself by an actual standard and who keeps his head when those about him—just as those about us—are losing theirs.